Like most editors, I love words. So naturally, I love dictionaries. They are one of the primary tools of every editor’s trade, and my go-to dictionary is Merriam-Webster’s Collegiate Dictionary. Not surprisingly, I was thrilled to hear last fall that M-W had added over 840 new words to the dictionary. Words are added to a dictionary when the general population uses them often enough. This process results in a descriptive dictionary, which includes commonly used words even if they, and often their spellings, are not standard.

In other words, dictionaries illustrate how we speak 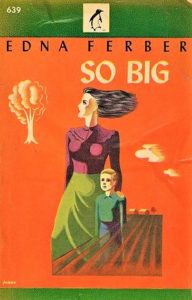 This process of adding new words is a reflection of the ever-evolving nature of language. But I recently noticed an unintentional downside of language evolution when I read So Big, the 1925 Pulitzer Prize-winning novel by Edna Ferber. Set during the turn of the century in a midwestern Dutch farming community, the protagonist, Selina DeJong, regretfully leaves the comforts of being the spoiled daughter of a gambler for the hardships of being a small-town schoolteacher and later a widowed mother and farmer. The story is beautifully written in an elegant and witty manner.

It was fascinating to see how much language has evolved since the book was written in 1924. For example, many words in So Big retain the British spelling: parlour, draught, ploughed, colour, programme, sombre, savour, splendour, mould, humour. Other words include hyphens that have long since been eliminated: draw-bridge, wood-shed, to-morrow, week-end, band-stand, dare-devil, breath-taking, grand-dad, face-powder, wash-stand. But what I enjoyed the most was being introduced to “new” words, whose meanings I had to look up in my trusty M-W dictionary. Sometimes the words were so archaic I couldn’t find them in the dictionary (“bevoiled”), or I discovered them by wandering around on the Internet.

Here are some of my favorite words, followed by their dictionary meanings, as captured in Ms. Ferber’s wry, engaging prose.

“They prefaced, interlarded, concluded their remarks to each other with, ‘My deah!’”
interlard: to vary by intermixture

“Peering down the perforations in the floor-hole through which the parlour chimney swelled so proudly into the drum, Selina could vaguely descry Mrs. Pool stationed just below, her gaze upturned.”
descry: to catch sight of

“The tip of that elegant and erstwhile alabaster feature had been encarmined during the night by a mischievous brush wielded by that same wight who had been busy painting fronds and lacy ferns and gorgeous blossoms of silver all over the bedroom window.”
encarmine: to make red; wight: a living being

“His little finger elegantly crooked, he pendulumed the box right and left.”
“Pendulumed” does not appear in the dictionary as a verb but rather as a noun

“The food had been patterned as far as possible after the pale flabby viands served at English hunt breakfasts and ruined in an atmosphere of lukewarm steam.”
viand: an item of food

“He now eyed [the object of beauty] in a catalepsy of admiration.”
catalepsy: a trancelike state marked by loss of voluntary motion in which the limbs remain in whatever position they are placed

“From the first, the schoolhouse stove was her bête noire.”
bête noire: a person or thing that one particularly dislikes

“In the theatre he came out to the edge of the runway and took the audience in his arms. He talked like a bootblack and sang like an angel.”
bootblack: one who shines shoes

“This was to influence a number of Selina’s habits, including nocturnal reading and matutinal bathing. Selina was a daily morning bather in a period which looked upon the daily bath as an eccentricity, or, at best, an affectation.”
matutinal: of, relating to, or occurring in the morning

“Their names were burbankian monstrosities born of grafting the original appellation onto their own idea of beauty in nomenclature.”
“Burbankian” is not found in the M-W dictionary. It apparently is derived from the work of Luther Burbank, a noted botanist/horticulturalist known for his use of grafting to create different species of fruits, flowers, grains, grass, and vegetables.

“She spent the time between one and three buying portable presents for the entire Pool household—including bananas for Geertje and Jozina, for whom that farinaceous fruit had the fascination always held for the farm child.”
farinaceous: having a mealy texture or surface

“Her garments, laid out the night before so that their donning next morning might occupy a minimum of time, were mortuary to the touch.”
mortuary: of, relating to, or characteristic of death

So, I leave you with my favorite example of Ms. Ferber’s use of wonderfully unusual (to today’s ear) word choices that not only create a stirring visual for the reader but perfectly describe the strength and fortitude of her main character.

“For equipment she had youth, curiosity, a steel-strong frame…and a gay adventuresome spirit that was never to die, though it led her into curious places and she often found, at the end, only a trackless waste from which she had to retrace her steps, painfully. But always, to her, red and green cabbages were to be jade and Burgundy, chrysoprase and porphyry. Life has no weapons against a woman like that.”
chrysoprase: an apple-green chalcedony valued as a gem
porphyry: a rock consisting of feldspar crystals embedded in a compact dark red or purple groundmass