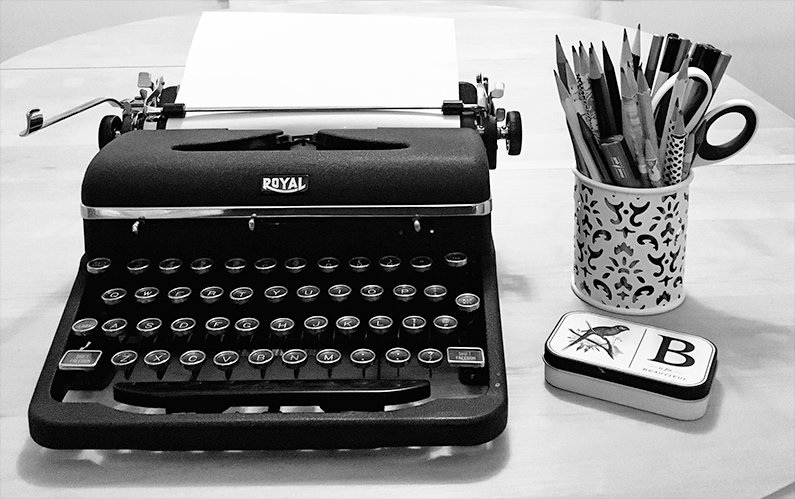 Like many, I decided to start the new year with a few well-intentioned resolutions: lose that pesky ten (or more) pounds, exercise consistently, clear out the garage, declutter the closets. But the problem with this year’s resolutions was that they were exact repeats of every other year, and they felt more like punishment than achievable goals. So, this year I decided I’d pick a fun resolution. I would get some use from my beloved vintage typewriter that I proudly display in my home office to write my monthly blog.

What better way to write a blog about my love affair with the typewriter than with a typewriter!

My obsession with the typewriter began when I learned to type in the seventh grade. I had hoped to take girls’ glee as one of my elective junior high classes, but my mother, in her infinite wisdom, put the kibosh on that and insisted I take typewriting from Mrs. Moffatt. After school, I would practice on my mother’s manual typewriter, a Royal Quiet De Luxe model, that she had purchased in 1948. How I loved that hefty little machine, the smell of the ribbon ink, the feel of the round glass keys, and the look of its sturdy, nubby-textured case.

For some reason, my mother’s typewriter went missing in the late ’90s when she moved from our family home to a condominium. How this happened is unclear as my mother was a maven in the fine art of hoarding. So, I was overjoyed when I discovered that one of my college friends was married to a guy who collects, restores, and sells, among other things, old typewriters. I asked him to keep a lookout for the Royal Quiet De Luxe and later jumped at the chance to buy the exact model of my mother’s when he tracked one down for me.

Fast forward to 2018. Time to make good on that New Year’s resolution and get cracking on my overdue blog post. I took the Royal out of its case, placed it gently on my dining room table, lovingly rolled in a fresh piece of paper, placed my fingers on the HOME keys, and began to type.

It quickly became apparent, however, that nostalgia was responsible for my fond memories of typing on the Royal 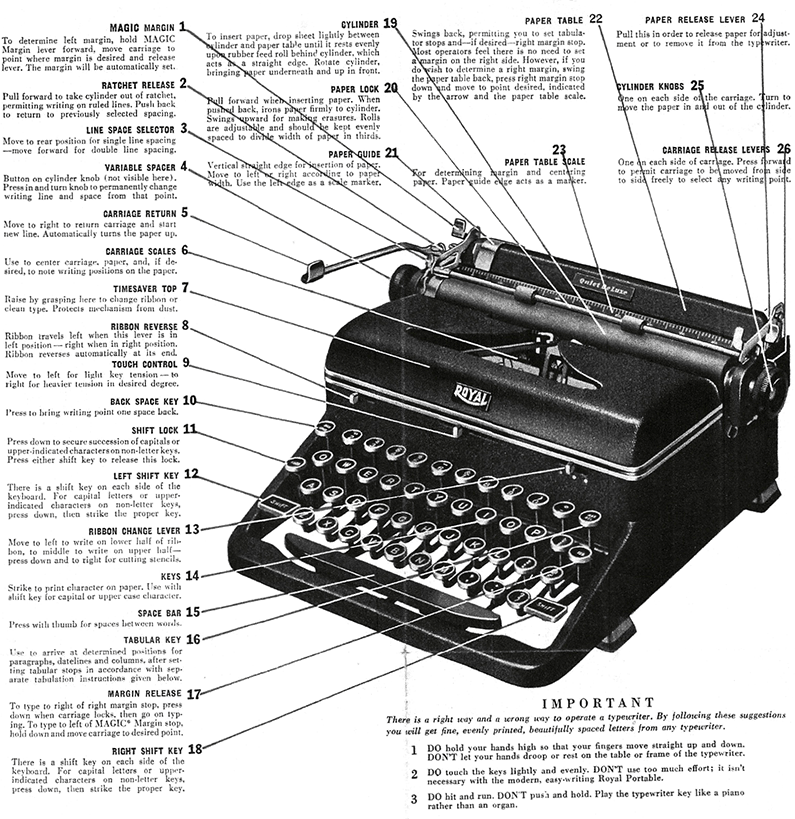 The reality was that this machine was a beast to operate! I quickly discovered that typing is a painfully slow and physical process. I had forgotten how hard one has to press—or rather, pound—on the keys. It’s exhausting, although it makes for a surprisingly effective upper body workout. Given the exertion required, I am confounded by the instructions that came with the typewriter. One direction states, “DO touch the keys lightly and evenly. DON’T use too much effort; it isn’t necessary with the modern, easy-writing Royal Portable.” I beg to differ. The typist is also directed to “DO hit and run. DON’T push and hold. Play the typewriter key like a piano rather than an organ.” Right.

The use of the adjective “quiet” to describe the Royal is a complete misnomer. While I enjoy hearing the keys striking the paper, there is nothing quiet about the clack clack clack that emanates from this little machine when in use. I guess everything is relative, but one has to wonder what “loud” typewriters sounded like in 1948.

Another vexing aspect was that I had to relearn the layout of the keyboard. While it is essentially the same as today’s QWERTY keyboard, there are differences. For example, the keyboard lacks the number “1.” Instead, the typist must use a lower case “L.” There is also no exclamation mark. To achieve this form of punctuation, one has to type an apostrophe, backspace, and then type a period. Moreover, I found myself constantly searching for the backspace key, which is located on the left, rather than the right, side of the keyboard.

So, after struggling for an hour to type this blog, I reluctantly returned to my desktop computer to finish. It was astonishing the difference between the two experiences. My fingers practically flew across my quiet, modern keyboard and making corrections took virtually no effort. Sadly, I had come to terms with the reality of using yesterday’s quaint machinery.

As much as I adore all things vintage, there is something to be said for embracing new technology

So, for all you authors who still use a typewriter to write, I applaud your stamina and loyalty. I admire you, Janine Vangool, for not only collecting Royal Quiet De Luxe typewriters but for writing The Typewriter: A Graphic History of the Beloved Machine, a wonderful compilation of all things associated with the small but mighty typewriter. Tom Hanks, I appreciate your including images from your vintage typewriter collection in your newly penned book, Uncommon Type: Some Stories.

But for me, reality requires that I limit typing on my Royal typewriter to the occasional to-do list, thank-you note, and grocery list and leave the heavy lifting to my Mac. And while I can’t claim to have read Marcel Proust’s epic novel, I can certainly relate to this observation: “Remembrance of things past is not necessarily the remembrance of things as they were.”

Many thanks to Steve Dymale, a fellow devotee of vintage stuff, for finding my Royal. Steve is not only an excellent collector, researcher, and historian, he’s a damn fine writer! Check out his Etsy website.